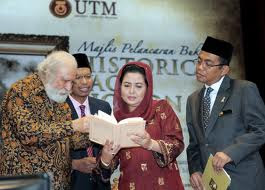 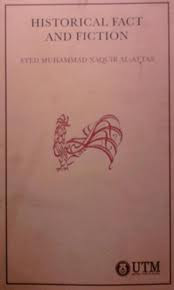 The book is published by UTM Press and bears the maiden imprint of CASIS, a centre of excellence that is poised to position UTM at the global level as an institution that offers high level humanities studies and research program as well as maintaining its status as a highly advanced science, technology and engineering-based University.

The book is the latest in a series of thought provoking and landmark books by Tan Sri al-Attas, from his Origin of The Malay Sha’ir, The Concluding Postscript of the Malay Sha’ir, The General Theory Of Islamization of the Malay Archipelago, The Correct Date of the Terengganu Inscription, and many others that redirect the interpretation and conclusion of Islam in the Malay Archipelago, and of Islam and its role in World history.

Tan Sri Prof. al-Attas in many of his intellectually stimulating works and this book in particular, brought forth a method of analyzing and scrutinizing the problematic aspects of the interpretation of our history that have been left unsolved, and many have taken for granted, from the legacy of European historians of the Malay Archipelago.

We all would agree unanimously that among the characteristics of a great work is that it gives its readers long lasting guidance, either at the personal level or societal level. This book is destined to fill that position because not only it guides us individually, but more importantly, as a nation the penetrating insights therein have rekindled a newly-found confidence in each and every one of us – that our history, its problems, explanations and solutions, are ours.

The weak logical analysis and rational estimation of the European scholars of our history, must be put in their proper place, for Islamization of our region is a process that is uniquely ours and it is innate in our consciousness.

This book reminds and guides us of that process in the past and it will continue to guide and inspire our generations in the future, like many other books of Tan Sri Prof. al-Attas.

At the global level, this book reignites the illuminating knowledge of Muslims in this region of their veritable history and one that should not be construed by spurious thinking due to errors and fallacies in chronological frameworks by

European historians who write concerning Islam in this region. Tan Sri Prof. al-Attas has drawn the intellectual charts of the global Islamization process for the Malay Archipelago.

History is indeed a very important element in a nation’s self-understanding and identity, and in facing contemporary and future challenges. Contrary to popular belief, erudite scholarship in history and other so-called non practical subjects are of profound importance; albeit not in the narrow material sense, but in a deeper sense of our being as a sovereign nation and people.

A proper understanding of our own history can offer us greater unity, and fortifies us against grave historical challenges. We cannot move forward with confidence and unity of purpose without properly understanding how we have come to be what we are as a nation and people without drawing inspiration from our sacrifices and successes, and lessons from our mistakes and failures.

True knowledge of our history points us to our true leaders and heroes as well as enemies. The prominent poet philosopher, Muhammad Iqbal of Pakistan, once said in the first third of last century: “In order to move forward we must look backward.’ In this sense also, we concur with Marcus Tulius Cicero, the great Roman writer, politician, and orator who declared more than two millennia ago: “Not to know what has been transacted in former times is to be always a child. If no use is made of the labours of past ages, the world must remain always in the infancy of knowledge.”

Ever realizing the importance of History, Tan Sri al-Attas has profoundly inscribed in the Dedication Page of his latest book:

“He in whose heart no History is enscrolled,

But he that keeps the records of the Dead

Adds to his life new lives a hundredfold.”

In this latest and very exciting work, Historical Fact and Fiction, Tan Sri al-Attas argues, with irrefutable evidence and characteristic incisive logic, the cultural and personal identity of the early missionaries who, with great spiritual vision, planning and sacrifice, brought the religion of Islam to various parts of Southeast Asia, including Indo China, the Malay Peninsula, Indonesia, Brunei, and Southern Philippines without the attendant benefits of military force or external sovereign power.

He starts by offering a definition of the nature of Islamic civilization and the Malay civilization of which it is an integral part. This concise definition of what an Islamic civilization is is arguably done for the first time. He gives a penetrating insight into the ways of spurious thinking and analytical reasoning among the historians of the Malay world in their explanation and interpretation of historical events pertaining to the coming and spread of Islam in the Archipelago from the 8th century, and especially from the 12th-16th centuries of the Common Era.

He also offers compelling empirical, rational, and genealogical evidence, supported by a wide knowledge of the religion of Islam and its cultural and political history, that almost all of the early Muslim missionaries in this region descended from al-Husayn, the grandson of the Prophet Muhammad (PBUH), and came from the Great House of Ahmad bin Isa al-Muhajir, the ancestor of the Sayyids of Hadramaut, Yemen. They brought Islam to the Malay world directly from the Arab world and some through Persia, while some others via India and Indo-China. All the great Muslim missionaries in Southeast Asia originated from Imam Muhammad Sahib Marbat, who is descended from Ahmad Isa al-Muhajir.

He exposes factual errors and logical fallacies in the chronological framework and the educated conjectures of the prominent historians of this region, as well as their tainted assumptions on the religious and cultural effects of Islamization in our history. In dealing with the Islamic past, his critique of their empirical estimation deserves due appreciation. Nevertheless, he always maintains his intellectual integrity and honesty by acknowledging the important and useful contributions of these historians.

In contradiction to what the historians assume as the facts of history, the author demonstrates his own explanation and interpretation of the major issues and casts new light on many basic matters that have hitherto eluded inquiry. For example he offers compelling arguments as to the true origin of the name of Sumatra and Melaka, the correct name and identity of the earliest Muslim rulers of Pasai, Melaka, Brunei and Mindanao. He also brilliantly demonstrates the creation of the several distinctive Malay phonemes in the Arabo-Malayo Jawi script.

This latest book of Tan Sri al-Attas was written in a difficult period of convalescing from an accident, and without any institutional and financial support. It is indeed a great testimony to his sincerity, dedication and passion in his services to the academic world and to this nation. This should be an inspiring lesson not only for academicians but also for other citizens of this country.

This book, and those that he has written, should be used as basic texts in the study of our history in our schools and universities. Since most of them are in English, this and the others should be promptly translated into the National Language. In fact, it will be better if these are also translated into other Muslim languages such as Arabic, Turkish and Urdu, which will further enhance mutual historical understanding between Muslim nations.


This page is maintained by Office of Corporate Affairs.
For any inquiry please send an email to : news@utm.my