Patrick Lee | August 29, 2012
Some Bahasa Malaysia words lazily borrowed from the English language may have come from the media, translations and even politicians.

PETALING JAYA: Dewan Bahasa Pustaka (DBP) – the Malay language’s masters- has acknowledged that there are words that did not need to be borrowed from the English language to fit Bahasa Malaysia today.

Some of these words include uniti, sukses, transformasi, respon, kualiti and even rasis.

According to its head director Dr Awang Sariyan, these words may have come from various sources, including politicians.

“Some have come from fields of knowledge, including translations, through the media, and not excluding certain persons of influence,” he told FMT, before using the term “belanjawan” (budget) as an example.

“But around 15 years ago, there were leaders who changed it to “bajet”, without discussing this with the DBP, a government body formed to plan the national language,” he said.

Awang was referring to a recent FMT report where local writers criticised the lazy borrowing of English words into Malay.

National laureate A Samad Said previously said that a lot of these words did not come from the Malay language’s literary masters, and lamented that the tongue was fast becoming a “strange language”.

Writer Uthaya Sankar SB attacked politicians for their part in this, adding: “Perhaps they are thinking in their broken English, since they can’t think in Malay.”

It was an opinion that Awang seemed to share.

“I share the sentiments of those who are worried about the uncontrolled borrowing or absorption of words, what more when there are words or terms already in the Malay language.

“There needs to be a process in which the culture of the language is nurtured according to society…to prioritise the words and terms in our own language, especially through education and the mass media,” he said.

However, the DBP head said that it was still necessary to absorp certain words and terms from other languages, especially for those that were new to the Malay civilisation.

Various languages in the past, he said, contributed to the Malay language’s current vocabulary.

“The important thing is that the absorption of words and terms from foreign languages have to undergo modifications according to the Malay language, especially from the point of sentence construction, word structure, phonetics or its pronunciation,” he said.

Awang also remarked on the introduction of new words into the Malay vocabulary, especially of that from certain fields of knowledge.

He said that the masters of these areas needed to understand the concept and right method to modify these words to fit the Malay lexicon.

The principle of forming words, he said, was based on a guideline known as the Pedoman Pembentukan Istilah Bahasa Melayu.

At the same time, he said that absorbed words from foreign languages that were “steady” enough were entered into dictionaries.

Those that were not, or partially so, were added as well but labelled as “speaking language” or non-standard word forms.

This story makes me...

Posted by Unknown at 4:06 PM No comments: 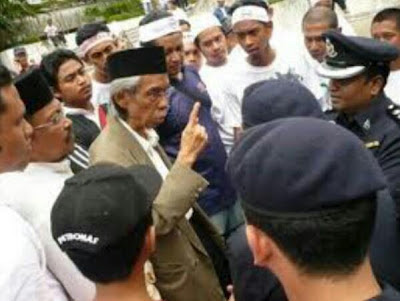 Posted by Unknown at 7:06 PM No comments: 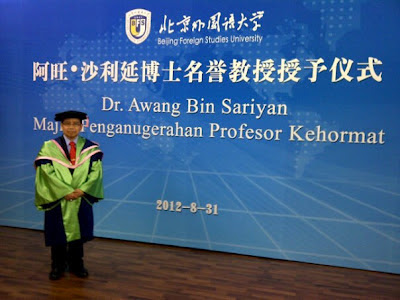