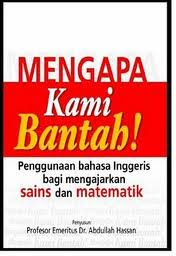 WE refer to the letter “Say ‘Yes to PPSMI’” (The Star, Oct 3) by Tunku Munawirah Putra, honorary secretary of Parent Action Group for Education (PAGE).
The author claimed that the Government was ill-advised when it decided to abolish PPSMI in 2009.

As a result, national schools are now not the school of choice as many parents prefer to enrol their children in Chinese and private schools. These remarks are mere conjecture.

We would like to clarify that the decision to abolish PPSMI was done after careful deliberations.
The Ministry consulted various stakeholders and conducted in-depth studies on the effectiveness of PPSMI and its impact on student learning before scrapping the flawed policy.

We found that during the implementation of PPSMI only 4% of Mathematics and Science teachers used 90% or more of English in the teaching and learning of the two subjects.

A majority of them used a mixture of Bahasa Malaysia and English. More often than not, the teachers had to switch to Bahasa Malaysia in their teaching because students could not understand their lessons in English.

A study conducted by a group of educationists from the Universiti Perguruan Sultan Idris (UPSI) revealed that 70% of Form Two students found it difficult to learn Mathematics and Science in English.

Another study done by a Universiti Kebangsaan Malaysia (UKM) professor concluded that PPSMI hampered students’ ability to understand Mathematics and Science concepts, hence resulting in their poor performance in the two subjects.

The Education Ministry also received numerous views from experts, non-governmental organisations and concerned individuals about the impact of PPSMI on student learning.

In the main, we found that students who had poor command of English were at the receiving end of PPSMI. They could not acquire the knowledge of Mathematics and Science as they were not proficient in the language that the two subjects were taught.

We estimated that about 500,000 students ‘fell victim’ to PPSMI each year. Obviously, it is gross injustice to these students if we decide to continue with the policy.

Only students with good command of English benefited from PPSMI. We found that these students also performed well in other subjects that are taught in Bahasa Malaysia, indicating that they will have no problem learning Mathematics and Science in Bahasa Malaysia.

After careful deliberations, the Education Ministry decided that the teaching and learning of Mathematics and Science should be conducted in Bahasa Malaysia in national schools and in vernacular languages in the Chinese and Tamil national-type primary schools.

This decision is in line with the position taken by Unesco that the mother tongue is the best medium of instruction in schools.
Thus, the claim made by Tunku Munawirah that the Government was ill-advised when it made the decision to abolish PPSMI is baseless.
She also made a gross factual error by implying that many parents prefer to enrol their children in national-type Chinese schools due to the abolition of PPSMI. This argument is not supported by fact.

We could not agree with the author that PPSMI is the only way forward for education in Malaysia should we want to create quality workforce and achieve high-income nation status.

This argument ignores the fact that the current generation of scientists, technocrats, lawyers, accountants and other professionals are the product of our National Education System where Bahasa Malaysia is the medium of instruction in schools.

For many decades, Bahasa Malaysia has been our national language and the language of knowledge. It has proven to be an effective medium of instruction in the national schools.

We, however, concur with the author that Malaysia must produce top grade workers who will be able to compete in the globalised world.
And for this reason, our country needs a population that is competent in English.

In relation to this, the Education Ministry has taken comprehensive measures to improve our students’ command of English through the Strengthening English Language (MBI) policy.

We are improving the methods of teaching and learning of English in schools, increasing English hours and hiring quality English teachers, including from abroad, to help our students be proficient in English.

We believe that there are many ways to improve English ability among our students and we are working very hard to realise this objective.
What we need is the support of all parents to help us enhance the quality of our education and improve student learning.