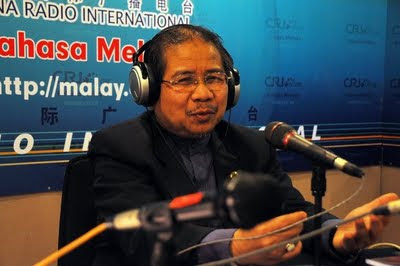 Malay Language At Crossroads: Going Back To Where We Started

This seven-part series dwells on critical issues relating to the fate of the Malay language.

Part 1 discusses the views of Prof Dr Awang Sariyan on the Malay language as the Malay Archipelago's lingua franca, and its diminishing role as the language of knowledge.

KUALA LUMPUR, June 27 (Bernama) -- The Malay language has played a prominent role throughout history, especially as the Malay Archipelago's lingua franca, and the language of trade and diplomacy.

It was also the language of knowledge, philosophy, law, civics, arts and history.

However, after half a decade of independence, the Malay language has lost its distinction as a language of unity, knowledge and communication. It has, consequently, lost its dominance.

The sad fate of the Malay language is a cause of concern for Malay language advocates and experts, such as Prof Dr Awang Sariyan, the first Malay studies chair at the Beijing Foreign Studies University.

Dr Awang is perturbed with the current state of the country's official language and the mother tongue of the Malays.

He expressed his concerns during an interview with Bernama here, recently.

Language advocates have painted a grim picture of the future of non-dominant languages, saying between 50 and 90 per cent of over 6,000 languages in the world will become extinct by the end of the decade.

Dr Awang, however, is optimistic that the Malay language is not on this extinction list, considering it is the mother tongue of 300 million people.

"If, previously, the use of the Malay language transcended all fields, now its position is at par with the Chinese and Tamil language taught in vernacular schools, while English reigns supreme," said Dr Awang.

According to him, although the Malay language has been accorded the status of the nation's official language under Article 152 of the Federal Constitution, its dominant position is only on paper and not in practice.

If the dominance of the Malay language is enshrined in the Constitution, why is it losing favour among people?

According to Dr Awang, the primary reason for this change is a lack of respect for, and understanding of the constitution, and poor implementation of its tenets.

Indigenous languages are given precedence over foreign languages in countries like Germany, Japan, China, Russia, and neighbouring Indonesia and Thailand.

Citing the example of Indonesia, Dr Awang noted that though the vast nation has over 6,000 ethnic groups, a strong political will has helped the Indonesian language remain dominant after the country gained independence in 1945.

Dr Awang, who was previously a visiting professor in Germany, said German was the dominant language in administration, education and public places in the country.

"English is used, but as a second language," he said, adding that the short studies he conducted in France and Netherlands also confirmed his observations.

Dr Awang observed the same in China, where he has been working for the last three years.

Though English is still used, the foreign language is not given precedence, and used only when necessary.

"However, this does not mean they do not learn English. In China, English is taught extensively, and students have to pass English at the secondary level," he said.

"But their government never made changes favouring English to the education policy, such as teaching science and mathematics in a foreign language, based on the premise that the Chinese language is not adequate," he added.

"We see that China is technologically advanced. Recently, they built the fastest train in the world, which will serve the Wuhan and Guangzhou route. They don't depend on foreigners to develop their technology, as they have their own strengths, including their own language, used widely in many fields," noted Dr Awang.

This advocate of the Malay language pointed out that any language has the potential develop further, as long as there were efforts to do so.

Dr Awang said, to consolidate the Malay language as the language of knowledge, there should be no disruption and changes in the policy favouring it.

"The Malay language that we are using is yet to achieve the desired standard of command in certain sections of the society, with the pidgin language prevailing in the streets," he said.

"At times, when efforts are made to push for higher standards for the Malay language through the education and broadcast system, it ends abruptly. An example is the 'bahasa baku' pronunciation system that was abolished in 2000."

"Therefore the Malay language used in official events like meetings and broadcast programmes (like interviews) is more of the pidgin Malay that would suffice only for ordinary conversations."

"To push for higher standards of the language, and Malay as the official language, earnest efforts are needed from all sectors, such as administration, broadcasting, print media, education and others," he said.

Dr Awang sees the education sector as critical in developing the Malay language, since it is the primary medium of instruction in schools and higher-education institutions.

So far, only UKM has a clear policy for language. Most thesis for the philosophy honors doctorate at UKM are written in Malay, a testimony to the fact that Malay can function as a language of knowledge.

Private higher-education institutions are required to teach three Malay subjects - Bahasa Melayu, Kenegaraan Malaysia and Pengajian Islam or Moral. However, except for the government-linked institutions among them, such as Universiti Multimedia, Universiti Tenaga Nasional and Universiti Petronas, these institutions often ignore this requirement.

Dr Awang also said institutions should, without delay, revert to Malay as the medium of instruction for science and mathematics.

In conclusion, the Malay language must regain its rightful place, as enshrined in our language policies - the National Language Policy and the National Education Policy.